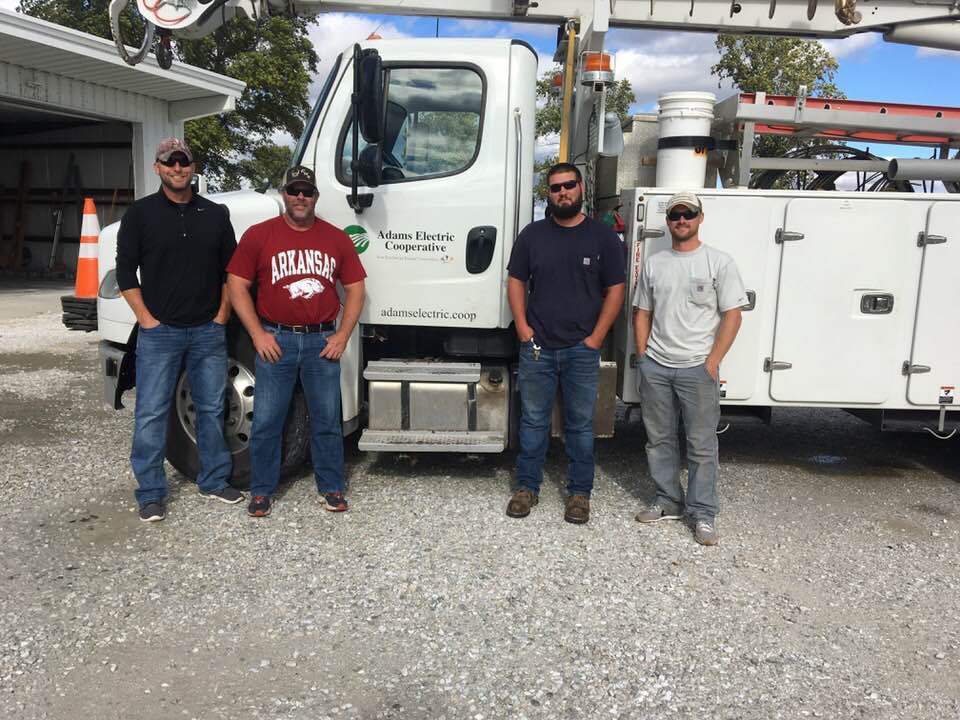 Adams Electric Cooperative joined other Illinois electric cooperatives to respond to damages from Hurricane Michael. Adams Electric sent a four-man crew, Line Foreman Mike Olson, Journeyman Linemen Gary Wagner and Chad Reische, and Apprentice Lineman Brennan Caspermeyer. A little over two weeks ago, the crew headed to South River Electric Membership Corporation in Dunn, North Carolina then were diverted to Randolph Electric Membership Corporation in Asheboro, North Carolina. After a short stay in North Carolina with damages under control, Adams Electric’s crew was sent to West Florida Cooperative, finally returning last Friday. Although a lot of progress was made, much of West Florida and the Gulf Coast is still rebuilding.

The crew started their journey toward North Carolina, which was still completing restoration from Hurricane Florence. After Hurricane Michael rolled through, the storm knocked out power to two million electric meters in six states, including 375,000 members of electric cooperatives. The majority of outages were in Georgia, Florida, Virginia, and North Carolina.

One co-op in Georgia reported over 2,500 poles down with winds at 120 mph and described the poles falling like dominoes, the worst damage a Georgia co-op has seen from a hurricane.

Florida had three co-ops that were one hundred percent down. Communication was sparse or non-existent. One of their biggest dilemmas was where to house help.  Accommodations that would have worked were gone and others were booked. They brought in a “tent city” to prepare for about 650 linemen. At one point, Florida estimated that they had at least 10,000 poles down. Making matters worse, Interstate 10 was shut down because of downed trees and areas of Highway 98 were non-existent.

Brennan Caspermeyer, an apprentice lineman from Adams Electric who experienced his first storm said, “It was definitely an experience. You see photos on the news and Facebook all the time, but photos do not do justice to the level of disaster. A first-hand account really shows you the level of destruction a hurricane has.”

Mike Olson, line foreman from Adams Electric who has responded to numerous storms, added, “Something that people may not think about is cooperatives can get the man power but they don’t have the material on hand for a big restoration. Our biggest struggle was finding the material. You also have to get used to sleeping on a cot in a tent – this was only my second time with that situation.”

Co-ops in the most heavily damaged areas, West Florida and the Gulf Coast, expect a long road to recovery ahead. Illinois crews were sent home last week with Adams Electric crews returning on Friday, October 26. No replacement crews were sent as the remaining cooperatives will be using crews from Florida and surrounding states to finish the restoration which will still take many weeks.