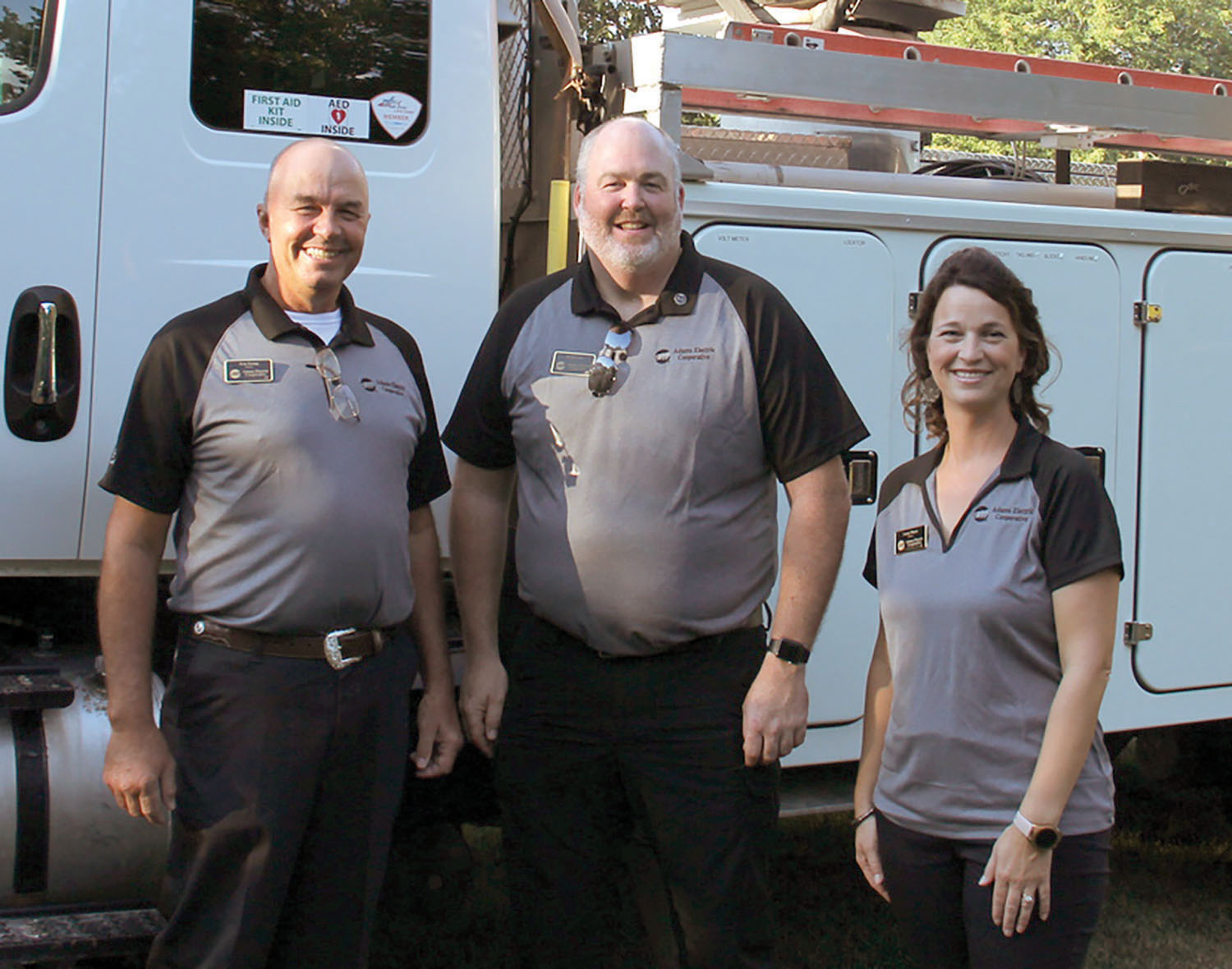 Members of Adams Electric Cooperative gathered Wednesday, Sept. 7 at Bailey Park in Camp Point for their 82nd Annual Meeting. They enjoyed a meal, vendor booths, entertainment, activities for kids, and updates about their electric co-op.

During the meeting, three members were re-elected to three-year terms on the board of directors. They were Eric Ewing of Rushville, Brent Clair of Loraine and Laura Meyer of Liberty.

“It is a tremendous honor to stand before you as the president of the Adams Electric board,” said Becky Barlow during her report. “Tonight, we gather to affirm our dedication to our co-op families and share common experiences.”

Barlow says despite the many challenges and changes ahead, the board and co-op will always put the members of Adams Electric first.

“Our commitment to becoming more aware of green technology is solid, but we must also utilize all other forms of producing electricity to keep energy reliable and affordable,” she said. “We will forge ahead with confidence due to our co-op’s economic strength and leadership.”

The Midwest Independent System Operator (MISO) is the regional transmission operator and dispatcher of generation resources for 15 states including our area. The most recent MISO capacity auction saw record prices. Thompson explained, “The capacity price went from $5 to $236, forty-seven times higher, signaling a shortage of dispatchable generation resources in the northern part of MISO.”

In regard to the news of rolling blackouts, Thompson explained, “The thing to remember is the potential for rolling backouts is greater than in the past. The warnings of potential rolling blackouts are intended as notification that the probability of an event has increased. There still must be a multitude of events that occur simultaneously to force MISO to use rolling blackouts.” He explained there must be a high load, loss of generation assets, transmission outages or a combination of all three to require rolling blackouts.

Finally, Thompson discussed the expansion of the transmission system in the co-op’s service territory. “These projects greatly enhance the reliability of our service to our members and position the cooperative for additional electrification,” he said.

Board treasurer Tom Travis shared the financial report. He said the total revenue for the year increased by $711,000 to a total of $23.8 million. Energy usage increased 1.4 percent over 2020.

“Our goal is to continue retiring capital credits each year to our members,” Travis explained. “Another goal is to maintain our equity above 40%. We finished 2021 with an equity ratio of 42.2%.”

Travis added, “Adams Electric ended 2021 with an operating margin of $601,262. All margins total $1.8 million. Margin allocation notices have been sent to all members with service in 2021 informing them of their share.”

During the meeting, the co-op recognized several community and youth programs.

The Youth to Washington program is a national event with around 1,500 student-leaders sharing in a week-long tour of Washington, D.C. sponsored by electric and telephone cooperatives across the U.S. Manager of Communications Laura Bergman recognized the three students who represented the co-op: Aria Seneczko of Central High School, Madison White of Rushville-Industry High School, and Olivia East of Central High School.

A total of 222 students across the state competed for 14 scholarships awarded through the Illinois Electric Cooperative (IEC) Memorial Scholarship Program. Bergman recognized Siera Houston of Brown County High School, the recipient of a $2,000 IEC Memorial Scholarship.

To date, the Penny Power program has awarded $595,310.18 in grants. This is thanks to the members of the co-op who round up their monthly bills to the next dollar. Director Ewing presented the Schuyler County Humane Society a grant for $516 as part of the latest Penny Power grant cycle.

Adams Electric Cooperative is a member of Touchstone Energy — an alliance of 700 local, consumer-owned electric utilities around the country. Adams Electric Cooperative is committed to providing superior service based on four core principles: integrity, accountability, innovation and commitment to community. The co-op serves more than 9,000 meters over 2,260 miles of line in parts of Adams, Brown, Hancock, McDonough, Pike, and Schuyler counties. For more information visit adamselectric.coop.