Members of Adams Electric Cooperative gathered at Bailey Park on Sep. 4 for their 80th Annual Meeting of Members to elect board directors, get a financial update and hear about programs the co-op provides for the community.

Board President Roger Busen welcomed the crowd and discussed the past, present and future. He reminded them of the commitment of neighbors working together to bring electricity to the rural community, and even with the changing world, it’s still viable today. “We understand the spirit that helped create this co-op must be continually nurtured,” he said. “While times and technology will continue to change, our commitment to you will not.”

While Adams Electric may have started as an electric service provider, its impact on the community has continued to grow. The co-op now offers programs for students such as Youth to Washington, Electricity School and Power Town safety demonstrations. Programs for the community’s safety include Live Line Demos and first responder classes. The cooperative also has programs that directly impact the community such as community service from co-op employees, economic development assistance and the Penny Power Program.

Busen said, “As we continue to look toward the future, you can be confident the Adams Electric Cooperative will commit to explore new ways to help our members and our community.”

Special guest John Sullivan provided an overview of Illinois agriculture issues, discussed specialty crops such as hemp and detailed his role as director of the Illinois Department of Agriculture.

Adams Electric’s Penny Power program continues to be a popular way to fund projects for community organizations. Through this program, co-op members have the option of rounding their monthly electric bill to the next highest dollar, and proceeds are put into a fund. Each year, a committee determines which not-for-profit community organizations will receive funding and the amount for each. This quarter, the co-op received 22 grant applications. From them, 21 grants totaling $9,210 were awarded.

During the meeting, Manager of Marketing/Member Services Bill Stalder presented a $500 Penny Power check to Jon McCoy of the Adams County Fair Association. Other recipients from this latest grant cycle include Baldwin Elementary School, Community for Christ Assistance Center, St. Rose Catholic Church in Rushville and many others. A total of $488,133 in grants has been awarded since the program’s inception.

Each year, Adams Electric selects students to participate in the Youth to Washington trip, sponsored by the electric and telephone cooperatives. Manager of Communications Laura Bergman presented plaques to this year’s participants, Paul Cornwell and Olivia Rodgers, who shared high points of the trip with meeting attendees.

Sophie Marcolla of Quincy was recognized as an NRECA Glenn English Scholarship winner. She received the only $10,000 scholarship awarded annually by the co-op’s national association.

Treasurer Kris Farwell reported the cooperative had a solid financial year in 2018, with a net margin of $1.4 million. The area experienced extreme temperatures in the winter and summer, which favorably affected the co-op’s bottom line. She said, “Our total revenue for the year increased by $1,257,000 to $23.6 million. Energy usage increased to a record 175 million kilowatt-hours, for an overall increase of 6.5 percent over 2017.  Revenue from sales increased 5.8 percent while the total cost of electric service increased 5.7 percent.” 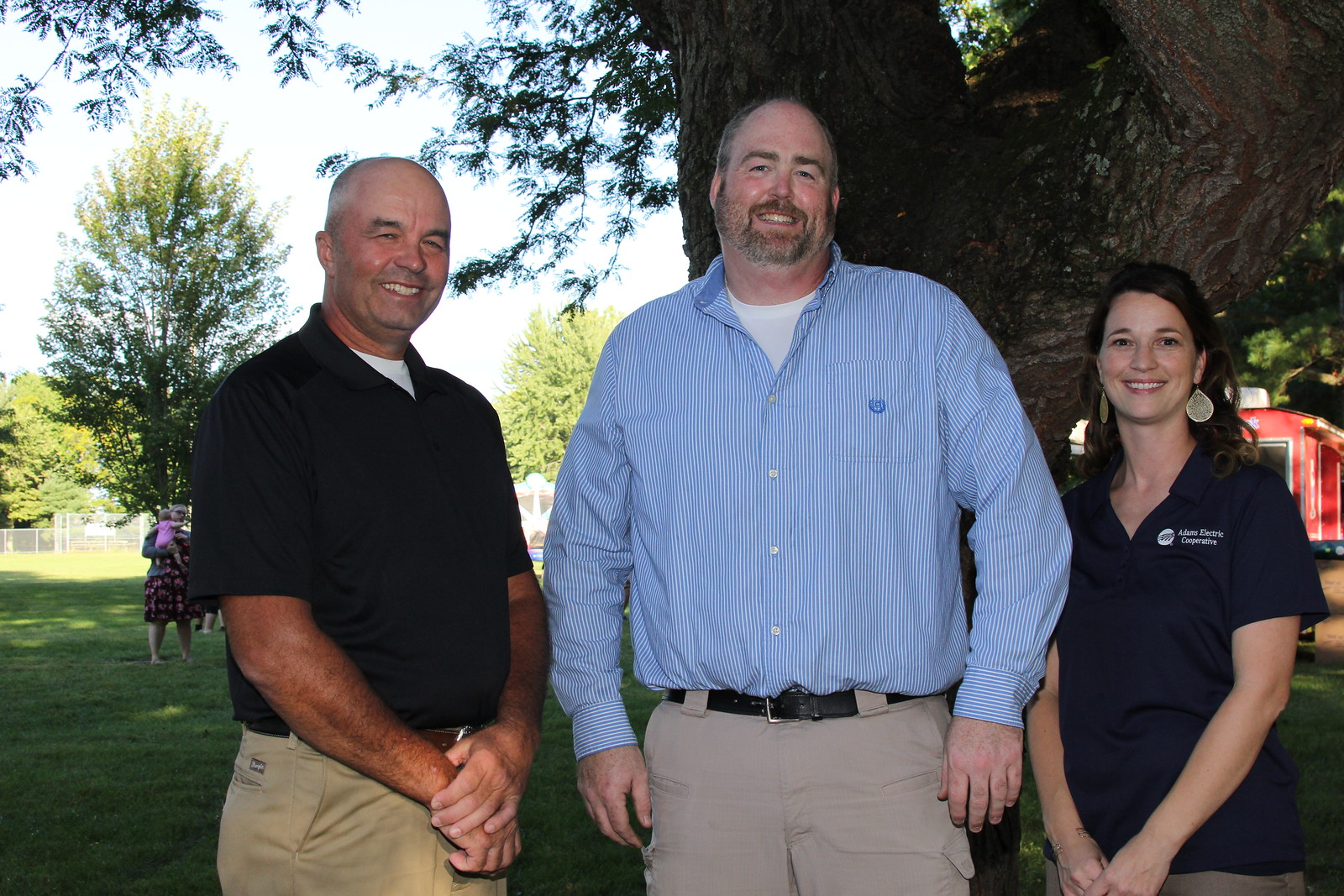 During the meeting, Eric Ewing of Rushville and Brent Clair of Loraine were elected to the co-op’s board of directors. Laura Meyer of Liberty was re-elected to the board.

Prior to the meeting, there were many activities for children, more than 30 local vendors, organizational booths and a roast beef dinner. Musical entertainment was provided by Tim Hart of Hannibal, Mo. Drawings were held for special prizes commemorating the co-op’s 80th anniversary.

As a fun way to close the meeting, General Manager Jim Thompson served as master of ceremonies for a Family Feud-style game with co-op employees as participants. The game incorporated information about electric cooperatives and the products and services offered by Adams Electric.

Adams Electric Cooperative is a member of Touchstone Energy — an alliance of more than 720 local, consumer-owned electric utilities around the country. Adams Electric Cooperative is committed to providing superior service based on four core principles: integrity, accountability, innovation and commitment to community. The co-op serves more than 8,889 meters over 2,249 miles of line in parts of Adams, Brown, Hancock, McDonough, Pike and Schuyler counties. For more information visit adamselectric.coop.

Pictured: New directors Eric Ewing, left, and Brent Clair, middle, were elected to the board of directors. Laura Meyer, right, was re-elected for a third term.