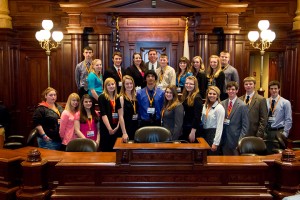 04/22/13 More than 200 students from the downstate Illinois traveled to Springfield on Wednesday, April 17, for the Illinois Electric and Telephone Cooperatives Youth Day.

With rural areas losing population, fewer legislators are serving downstate. The need for citizens to take active roles in making sure their legislators are aware of rural issues is of critical importance.

“Elected officials enjoy the opportunity to meet with students and learn first-hand their concerns. Many issues debated in the General Assembly personally affect their lives,” said Duane Noland, President and CEO of the Association of Illinois Electric Cooperatives (AIEC).

Sen. John Sullivan met with students representing Adams Electric and Adams Telephone Cooperatives. The students had an opportunity to view state government in action and question their legislators on key issues. While in Springfield, the students also visited the Illinois Supreme Court, Lincoln’s Tomb, the War Memorials, the Old State Capitol, and the Abraham Lincoln Presidential Museum.

The day was sponsored by the AIEC and Illinois electric and telephone cooperatives and is designed to introduce young rural leaders to state government. There were 24 co-ops from across the state represented at the event.

Adams Electric Cooperative is a member of Touchstone Energy — an alliance of more than 740 local, consumer-owned electric utilities around the country. Adams Electric Cooperative is committed to providing superior service based on four core principles: integrity, accountability, innovation and commitment to community. The co-op serves more than 8,603 meters over 2,226 miles of line in parts of Adams, Brown, Hancock, McDonough, Pike and Schuyler counties. For more information visit adamselectric.coop.